Tonight the air has a bit of coolness to it. It’s the week before the first of September.

I know that nowadays the kids go back early. By now they have been back for a couple of weeks. They already are doing their homework, the band is practicing for the first football game. Humdrum has set in and they are already looking forward to Fall break. But, things weren’t always that way.

The week before school started back….in the fifties, and especially the sixties, was my second favorite time of the year, right behind Christmas week.

Baseball season was long over, and the dog days of summer with their ninety degree days were starting to subside. Boy, was I glad!

What started out on May 31 as enthusiasm for a long break from the regimen of learning, ended up as loneliness by the middle of August. I’d read all my comic books two or three times each. I’d listened to all my 45’s over and over, until I knew all the words to all the Elvis songs by heart. Even “Just Tell her Jim said Hello”.

I was stuck in the house listening to my Mother tell me all the things she needed me to do over and over and over….

So, when the last week of August rolled around and Daddy asked me if I wanted to go pick up some school supplies, I was ecstatic.  School was starting back!  It was for real and not a drill!  Soon, I’d get to see all my friends again, get into a comfortable daily routine, and get out of the house for 8 hours every day.  Don’t tell anybody, but I really loved school.  I know that’s weird, but I did

There were no Walmart’s back then, so it necessitated a trip to Sears and Roebucks in Rome.  Daddy always liked going there anyway to look at shotguns and such, and Mom liked it because they had a large inventory of clothing back in those days. Back then Sears and Roebuck was the equivalent to a shopping mall all rolled in to one store, and if they didn’t have it in the store, you could order anything, and I do mean anything, from their gigantic catalog.  That regular Sears catalog weighed about 12 pounds, and was 6 inches thick.  I never liked the regular catalogs, but oh the Christmas catalog!  When they sent that wonderful, gorgeous Wish book out sometime in late October, I could spend hours upon hours gazing lovingly and longingly at all the treasures it contained.  Somewhere, packed away now, I have a 1963 Sears Christmas catalog that I bought some years back at Trade day.  I sincerely wish I could find it and thumb through it again.  Ah…the memories.

But, back to school supplies.

When I first started to school back in the fifties, we were instructed that we need yellow #2 pencils and “wide rule” notebook paper.  My Daddy would buy several packs of the yellow pencils.  In the depths of my memory, I think the pencils were made by Dixon Ticonderoga.

The pencils we had in the first through the fourth grade were excellent pencils.  It seems like one of those fine deep canary yellow instruments would last a month, and the graphite was extremely hard to break.  This would have been 1955-1958. After thinking about it a little bit, I looked it up and found out that they hand made the pencils up until 1958, when they started “mass producing” them.  Well, there ya’ go.  After the fourth grade, I went through a pencil a week, sometimes one a day.  You could sharpen one of the mass produced pencils in one of those super sharp grinding sharpeners, which hung on the walls in all the rooms and sometimes you had to sharpen them three or four times to get down to some lead that wasn’t already broken.  I trace the decline in American education and the reputation of American made goods being superior to all others, back to those pencils!

I found a package of old Dixon-Ticonderoga pencils at Trade day a few months back, which came from the early 1950’s.  I’m saving them for the apocalypse…if and when it gets here. 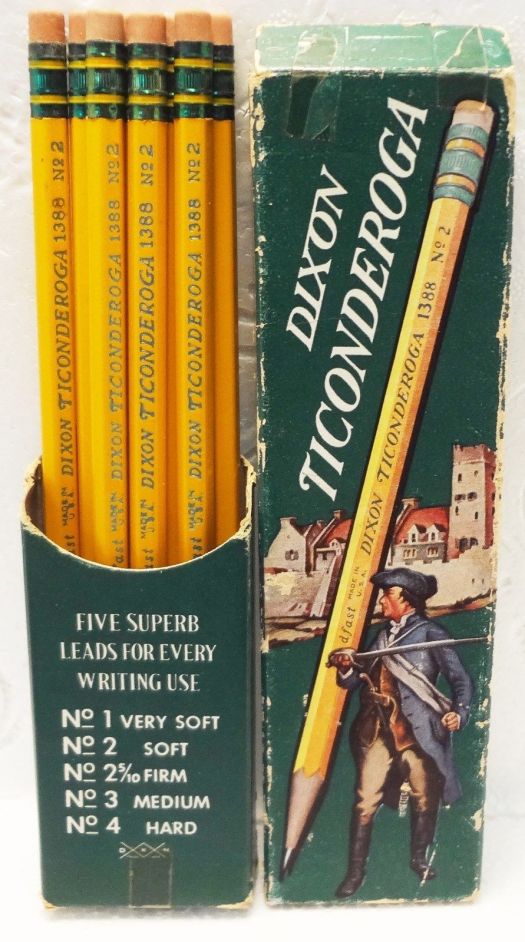 Of course, being kids, we would eventually “push the envelope” in our later years in grammar school and use the frown upon #3 leaded pencils, and even….sin of sins…would sometimes use the #4’s if the teachers didn’t notice.  That graphite in those pencils was as hard as a rock, and the subsequent handwriting on the paper was very light!  I remember one of our seventh grade teachers swearing that we were trying to make her go blind straining to read our papers.  Most teachers simply outlawed the use of the lighter pencils for any school work.

Along with the good old yellow #2 pencil, there was “Blue Horse” notebook paper.

Being from Georgia, we were inundated by Blue Horse products, because the manufacturer, Montag was in Atlanta.  Blue Horse had one of the neatest marketing ploys ever!  There was a picture of the Blue horse on every package of paper you bought from Montag, worth a certain number of points.  You would cut the little blue horse out, and save it, until you got enough points to send them off and redeem them for a prize!  Back in early 50’s, Montag put out a price paper that had “over 50,000 prizes for all you girls and boys”  Those prizes ran the gambit from a tiny little beanie (which I finally saved enough points to get one year) all the way to the “horse head” blue horse bicycle for the top rewards gatherer.  Schools also would get money for students sending in premiums for prizes to Montag.  As you can imagine, the blue horse brand of paper was quite popular in the 50’s and 60’s with both student and school.  I remember kids going around and begging and bullying to get those blue horse heads!  I hid mine until I had enough to get that beanie.  It was a piece of junk that fell apart in a couple of weeks.  Quite a disappointment.  But it was good paper, and you could count on it to fit into almost any notebook, because of the way they punched the holes.  The paper sold for a nickel a pack and contained about 25 5-hole punched sheets, allowing it to be conveniently placed in either 2 or 3 ringed binders.

Later on, they also sold wire ringed notebooks with some really hard colored cardboard on both sides of the paper.  Those things lasted practically forever!  I remember keeping a really thick one of those notebooks all the way from the 8th grade to my Senior year, in which to keep my personal notes and other things, such as doodles, drawings, poetry and genealogy notes.  I kept that notebook for many, many years….right on up until somewhere in the late 70’s to mid 1980’s before it fell to the wayside somewhere.  It might still be lurking around somewhere in a box in my storage building or somewhere else quite obscure.  I wish it would turn up, because I know there are some great memories hidden inside.